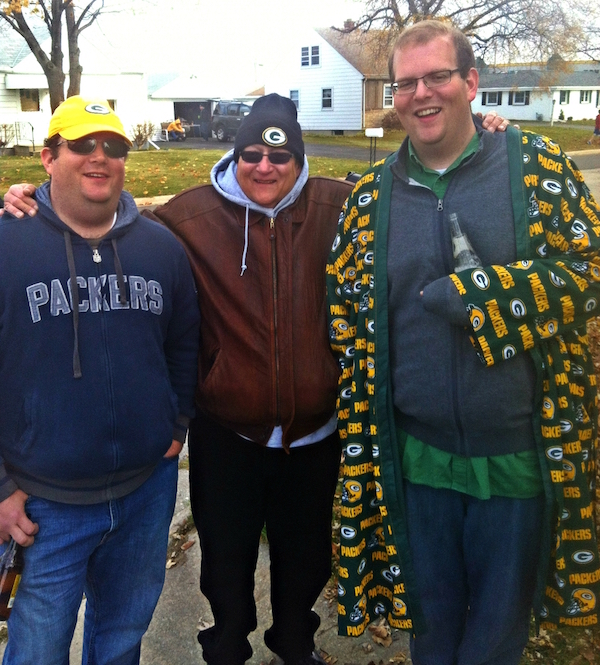 SUNDAYS WITH DAD: Allow us to introduce you to Bill Snyder, the world’s biggest Packers fan

We lost our dad unexpectedly in 2017. More specifically, on Feb. 7 — just a day after his 65th birthday, just two days after a remarkable Super Bowl, and just a month after he got to see his beloved Green Bay Packers achieve one of their most miraculous victories over the Dallas Cowboys.

For a lifelong football fan, talk about a great final stretch.

As we mourned his passing, my brother and I thought about how much joy the Packers brought to his life, and how close the team had brought us three through the years. Every Sunday saw texts from dad. He lived for this stuff.

So we decided to write an open letter to all Packers fans on Feb. 19, telling them a little bit more about this diehard fan, and announcing the creation of this site, where we were hoping to house other remembrances of the most loyal members of Packer Nation.

Below is our full remembrance of our father – and our complete thanks to all the Packers greats who gave him so much happiness during his 65 years:

We lost a great fan last week. One of the best.

He was a die-hard cheesehead: A shareholder, a training camp regular, an evangelist who preached green and gold to his sons early and kept the faith even when his team oundered at 4-6.

He was the kind of fan who would watch old Packers games before every Super Bowl. Who would start talking preseason in May. Who kept a VHS archive of the greatest games from the ‘80s and ‘90s.

He was our dad. And since the ‘50s, he was as loyal, hopeful and euphoric a Packer fan as Wisconsin could have hoped for.

We know there are scores of other dads out there just like him. But if you root for the Packers, we hope you might take a second to learn a thing or two about him. Because he was one of us, birth to death, and he really did you proud over his 65 years.

Wisconsin, you really would have liked this guy. As humble and thoughtful and kind as they get — until noon on Sunday, of course, when he wanted to see Reggie White make a tackle.

In fact, thousands of you did actually know him — and you definitely liked the guy. You just might not have known his name — or how deep his Packer pride ran.

If you went to school in Eau Claire in the early ‘70s and loved rock and roll, you probably heard the newest Jimi Hendrix or Eric Clapton or Stevie Ray Vaughan on his college radio show. If you and your family went out for ice cream in Milwaukee in the early ‘80s, you likely wound up at Farrell’s Ice Cream Parlor. He was the manager, so happy to help families make memories, proud to serve as a mentor for hundreds of young teenagers working their first job.

He helped tens of thousands of you with your eye exams and eyeglasses over the last 25 years, at Stein Optical and Visionworks stores in Watertown, Waukesha, Milwaukee and at Mayfair Mall. His customers followed him; his colleagues kept in touch with him years after they left the companies.

He worked hard. Really hard. But Sundays were off limits. He lived for Sundays: Eggs, bacon, Packers.

He was about as selfless and honest and hardworking a man as you’ll find. But then again, you’ll find plenty of those in this state. He exemplified the Wisconsin way: He put his family first, he was loyal to his friends, he was committed to his community, he rejected both cynicism and envy, he had a quiet dignity, and he always believed tomorrow would be a brighter day — if you worked hard enough today.

Those Packers highlights now double as some of our happiest family memories:

Thank you Don Majkowski, for reviving the Packer majik around our household and reenergizing our dad. We can still vividly recall the big turnaround — that 14-13 win against the Bears in 1989 when instant replay gave us our first Bears win in five years.

Thank you Kittrick Taylor, for catching that first Brett Favre missile and winning the game, sparking the career of the quarterback who would become my dad’s hero.

Thank you Brett Favre, for giving dad the single happiest moment of his life: 1997 Super Bowl, 54-yard pass to Andre Rison, touchdown. Our dad vaulted from his chair, fell to his knees, screamed to the heavens. In an instant, 30 years of belief were paid back in full.

Thank you Sterling Sharpe, for that wild card win against the Lions in 1994, the 40-yard touchdown pass that would forever be known around our house as “the catch.”

Thank you Antonio Freeman, for hauling in that immaculate deflection. Our dad never stopped talking about it.

Thank you Randall Cobb, for that fourth-and-8 touchdown pass a couple years ago against the Bears. We won the game, won the division, made the playoffs. Dad was a fan of yours from day one in training camp, and after that game, he never stopped raving.

Thank you Richard Rodgers, for that hail mary in Detroit. He watched it 100 times.

Thank you Aaron Rodgers, for this year’s miracle of a season — and that humdinger of a win in Dallas. We didn’t know this was going to be our dad’s last Packers season, but if you had told us his last hurrah would be a swing from 4-6 to the NFC Championship, and that he’d get to see you trounce Goliath in that Dallas matchup, we’d agree it was a fitting end to a six-decade joy ride.

Head down, heart full, believe in the system and fight through the whistle. That’s what the Packers are all about right? That’s also what we got from our dad.

And Mike Holmgren would be proud; it was a mantra that got our dad results. Bill contributed to his native hometown of Hartland until the day he passed, dying in his childhood home; his marriage thrived for more than 40 years; his sons went to Ivy League grad schools and established careers as a professor and journalist; he sat front row at both their weddings and gave speeches to his new daughter-in-laws; he held both of his grandchildren, and even got to watch a Packers game with his new grandson. Dec. 24 clubbing of the Minnesota Vikings.

That was a happy day.

He probably wouldn’t have mentioned all this, if he was serving you ice cream or fixing your glasses or bumping into you at Packers training camp. He probably would have asked about your family instead, about your kids – or asked how you thought that new rookie Geronimo was doing.

He was a quiet and reserved man. But a good man. Heck, he’d be embarrassed by this letter and all the fuss. But we think you’re the only ones who will really get him. We have seen all across the country, in Packers bars and at Packers rallies, how this team and its fans transcend the sport.

When you talk about Packers Nation, what you’re really talking about is commitment, community and camaraderie; a fandom rooted in tradition and family. Even when we weren’t watching the game in the same state, we were texting with dad about it, and cheering together. Our weekly communion.

We’re all united through this team. We all cheer together. And who knows: maybe we can help each other mourn, and heal, too.

Bill Snyder gave this state and this family everything he had. He left it all on the field. And he found in the Pack a place to put all his optimism and hope and heart. His very last selfie was of him wearing his Super Bowl XXXI sweatshirt before the Patriots-Falcons game. His very last text, after overtime: “Great Super Bowl, the Pack coulda won.”

He loved this team more than pretty much anything. And the first thing we thought of doing was sharing a little about him with all of you. His favorite people.

Thanks for taking a second to learn about one of our fallen. It’s nice to have a friendly shoulder to cry on, in these sports pages he always read, next to the same Packers bylines he cherished. And if you’ve lost someone from our pack, and could benefit from an open ear, please just write us. We’re in a hugging mood, are eager to hear more about the best Packers fans.

With love for our mother Sue

View all posts by greatestpackersfan